Former JCC site may be back on market 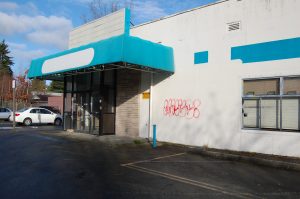 Are condos still coming to Wedgwood at the former home of the Jewish Community Center? Or will it be a retirement home? A park anyone? (Wedgwood neighbors can dream, right?)

It’s been more than two years since the Jewish Community Center moved out after the prized 3/4th of an acre site was sold for $3.95 million. About a year ago, developer Murray Franklyn scrapped its plans to build 88 condos there, citing a tanking economy.

A chain link fence came and went. Graffiti came and went (and came back several times, and remains today). Information about the site hasn’t come much at all.

However, Murray Franklyn’s Ron Boscola recently said the company was talking to potential buyers of the site (though they had not formally listed it for sale). He also said condos weren’t going to happen until the condo market turns around — which he doubts will be anytime soon.

Meanwhile, the site generates lots of buzz among Wedgwood community leaders, especially those part of the Wedgwood Vision Project. Committee members see it as a prime opportunity to influence development in a way that works for Wedgwood.

With its most recent assessment coming in at $3.31 million, it’s one valuable but idle piece of property — and a sign of the ongoing tough times in commercial real estate.

Clarification: Story changed on 3-24-10, removing phrase saying that the “JCC sold” the property to saying they moved out after it was sold. For the record, 8606 35th Avenue Associates LLC, sold the property. Thanks to alert reader Jonathan for pointing this out.

Final days at the ‘old’ Burke