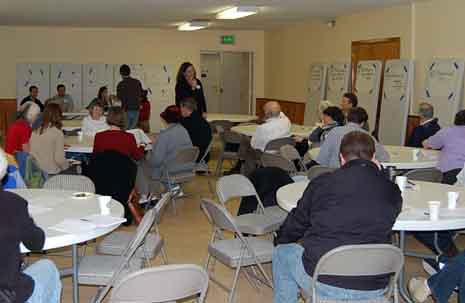 The process of creating a park in Wedgwood has kicked into high gear. More than 50 residents turned out to Wedgwood Presbyterian Church Thursday night at the first community meeting on the topic and the room was buzzing, especially with ideas on where the park should be located.

Most attendees want the park to be on 35th Avenue NE so that it’s part of pedestrian traffic and gives people another interesting location to stop off at during walks, getting coffee or running errands to the bank or grocery store.

The former substation lot is closer to the under-served — or “gap” — area that the city parks department has identified within the neighborhood. The lot also could be purchased from an amenable buyer (likely in the $1 million range). The Hunter site, however, is a bit farther from the “gap” area and isn’t known to be available. Both fit the criteria the city looks for in size — more than 10,000 square feet. Another site discussed was the area directly west of Wedgwood Elementary.

During a brainstorm, the list of desired amenities in the park ran the gamut from basketball courts, wooded trails, a community gathering area, playground, dog run and many more. It’s likely that the location and size of the lot acquired will play a big part in determining its usage.

Chip Nevins, an acquisition planner for the City of Seattle, gave an overview of the Parks and Green Spaces Levy Acquisition Projects, which this project falls under. He said the city has $24 million for 20 park projects and sites already have been identified in a few more densely developed neighborhoods.

Anyone interested in getting more information or getting involved in the process should email WedgwoodParks@gmail.com.